To mark 25 years since the launch of our original Auditorium loudspeaker, we’ve created the R25 Anniversary model.

Superﬁcially identical to earlier generations, but fundamentally a different design, this is in all respects the most advanced Auditorium yet.

A distillation of everything we’ve learned in three decades, the R25A has a vivid ‘see-through’ presentation, a coherence and freedom that lends fresh insight into all music genres.

An Auspicious Debut For The R25A.

The official launch of the R25A was at the Munich High End Show 2019. A number of listeners were more than a little taken aback by the energy and performance levels achieved by this relatively unobtrusive, apparently simple speaker system.

I returned from High End 2019 in Munich thinking of one speaker more than any other, those small white speakers that filled the big room with a full, magical sound. I’m still not prepared to call them giant killers – maybe just a small miracle that needs further investigation. 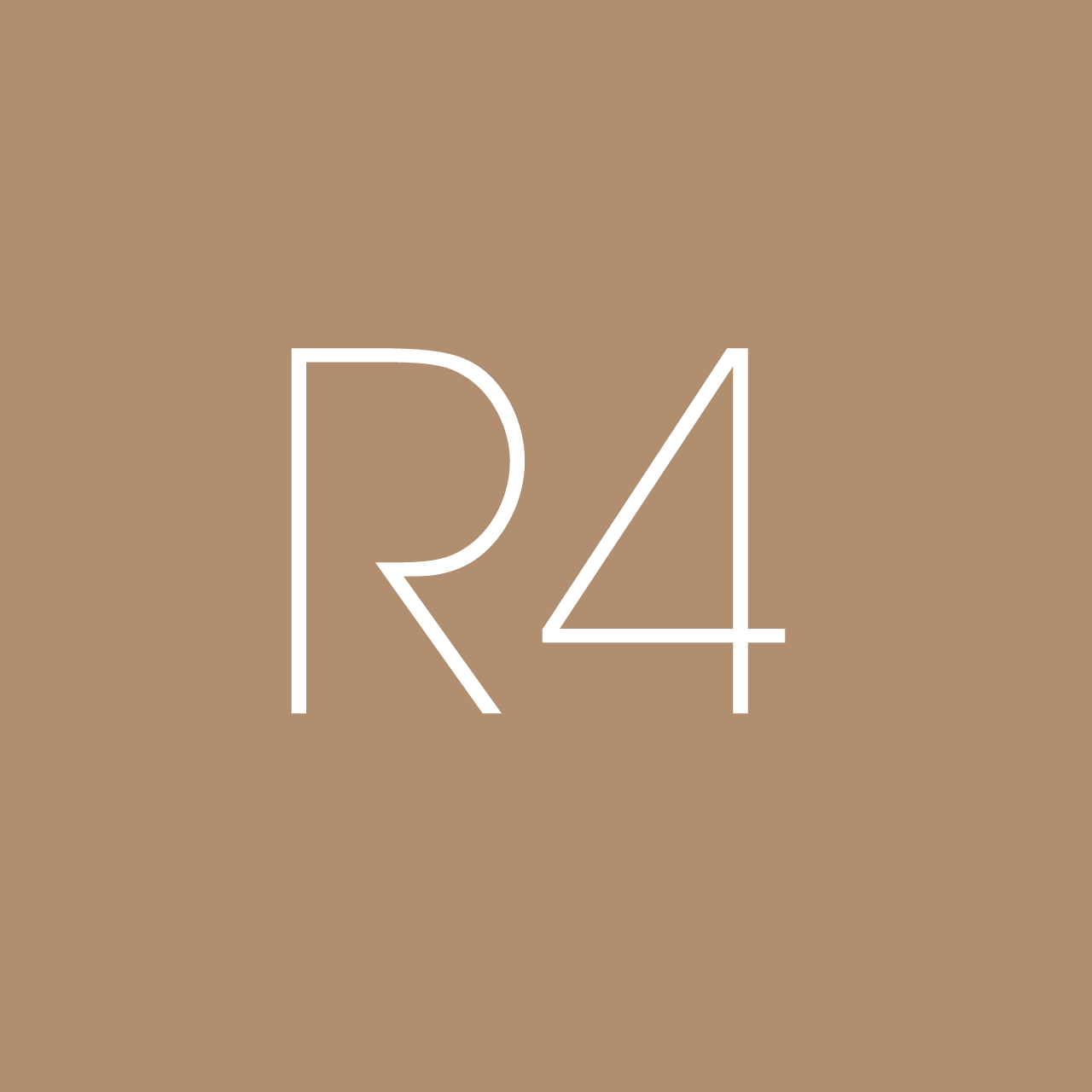 While it’s only an incremental change in nomenclature, we believe the R4 models deliver a significant increase in attainable performance levels. Along with the R25A Anniversary model, these are, by some considerable margin, the most rewarding Auditorium Series loudspeakers yet.

The model line-up now comprises the R25A Anniversary, Avatar R4, IBX-R4, IBX-RW4 and OBX-RW4. Changes are predominantly, but not exclusively, to the crossover circuitry & components, and are a logical development of the work done on the R25A model, which effectively ‘opened a door’ and subsequently embodied a new approach to our crossover design.

All share our favoured MTM (mid, treble, mid) driver configuration, which offers performance advantages over both a simple 2-way design and the more complex but less elegant 3-way option. The MTM topology possesses a more symmetrical polar and more even power response, as well as superior phase characteristics. Factor in higher sensitivity and lower intermodulation distortion and you have an elegant solution even before you design the crossover – a true Occam’s Razor approach. Presenting an easy load and a genuine 94dB sensitivity, each Auditorium model allows class A valve electronics to shine, bringing music to life with verve and vitality.

The elegantly proportioned cabinets and small footprint of the Auditorium Series conceal a meticulous, obsessive approach to the complex problems of loudspeaker design. The Auditorium’s unobstructive natural qualities cut straight to the heart of the musical performance. There is a common DNA from the Avatar R4 up with degrees of refinement, precision of component tolerancing, and overall component quality increasing significantly as you ascend through the range.

In 30 years of loudspeaker development, Living Voice has evolved to the point where around 90% of our crossover components are proprietary. Should we fail to find components that exactly meet our needs, we design in-house and have them engineered to meet our specific objectives – these include film & foil capacitors, non-inductive wire-wound resistors and precision air-core inductors. In this way we can temper the ‘voicing’ to meet our critical musical standards. Most recently, we have developed our own HF unit in conjunction with Scanspeak, a driver which preserves the elegance and filigree of the renowned Revelator but relieves it of a broad energy dip between 10kHz and 15 kHz.

Two 6.5” bass-mid drive units (again a proprietary design made for us by Scanspeak) are used in parallel to produce the equivalent surface area to a single 10” driver – but with half of the excursion and 50% lower intermodulation distortion. Our driver can work cleanly above crossover, facilitating seamless integration with the HF system without the need for steep electrical filter slopes or the use of notch filtering to counteract stop-band break-up modes.

Each Auditorium is ideally suited to exploiting the inherent advantages of class A valve amplification, and has been designed and voiced with the output impedance (and damping factor) of zero/low negative feedback direct-heated Triode designs in mind. In smaller rooms, the 8 watts offered by a single-ended 300B design can be fully realised, however we recommend the use of amplifiers with 15 watts or more to exploit the full dynamic potential available on a broad range of music programme. The dispersion characteristics of the Auditorium Series are such that they create a coherent soundstage even for listeners sitting significantly off-axis. This is emphatically not a ‘hot spot’ design. 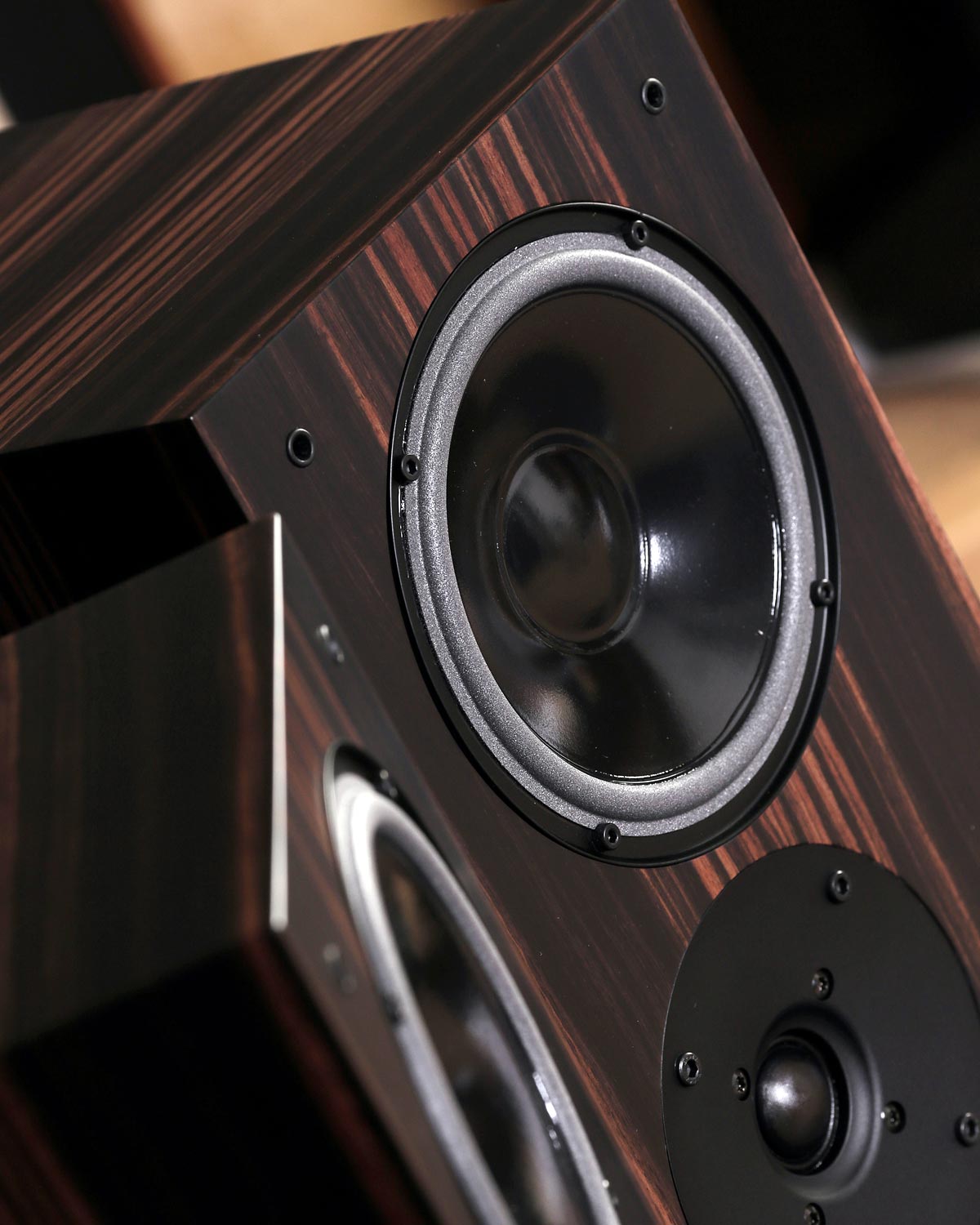 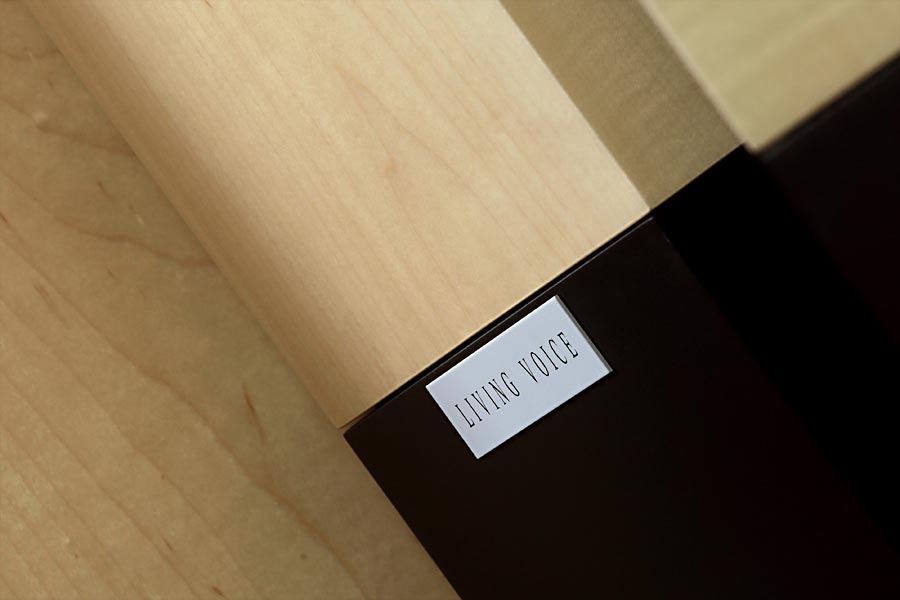 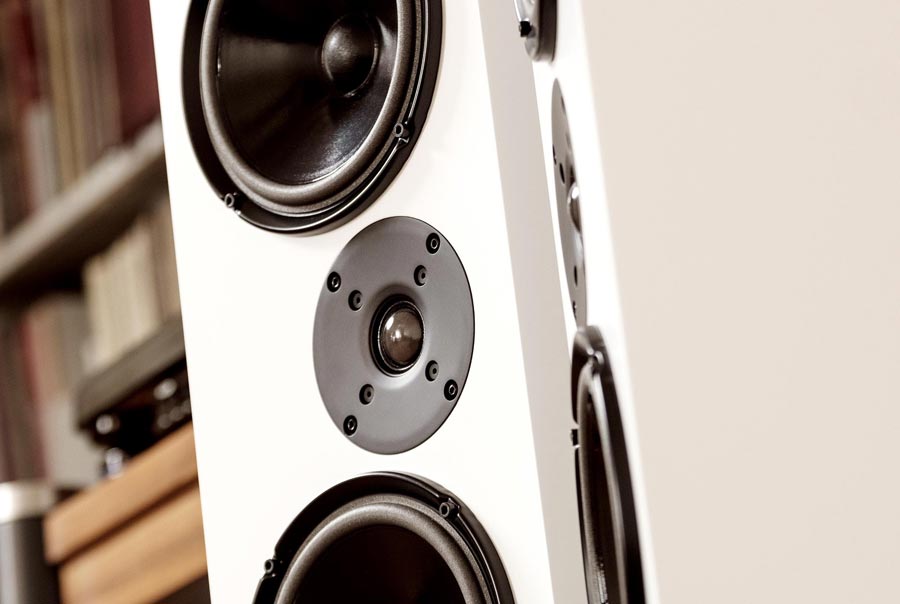 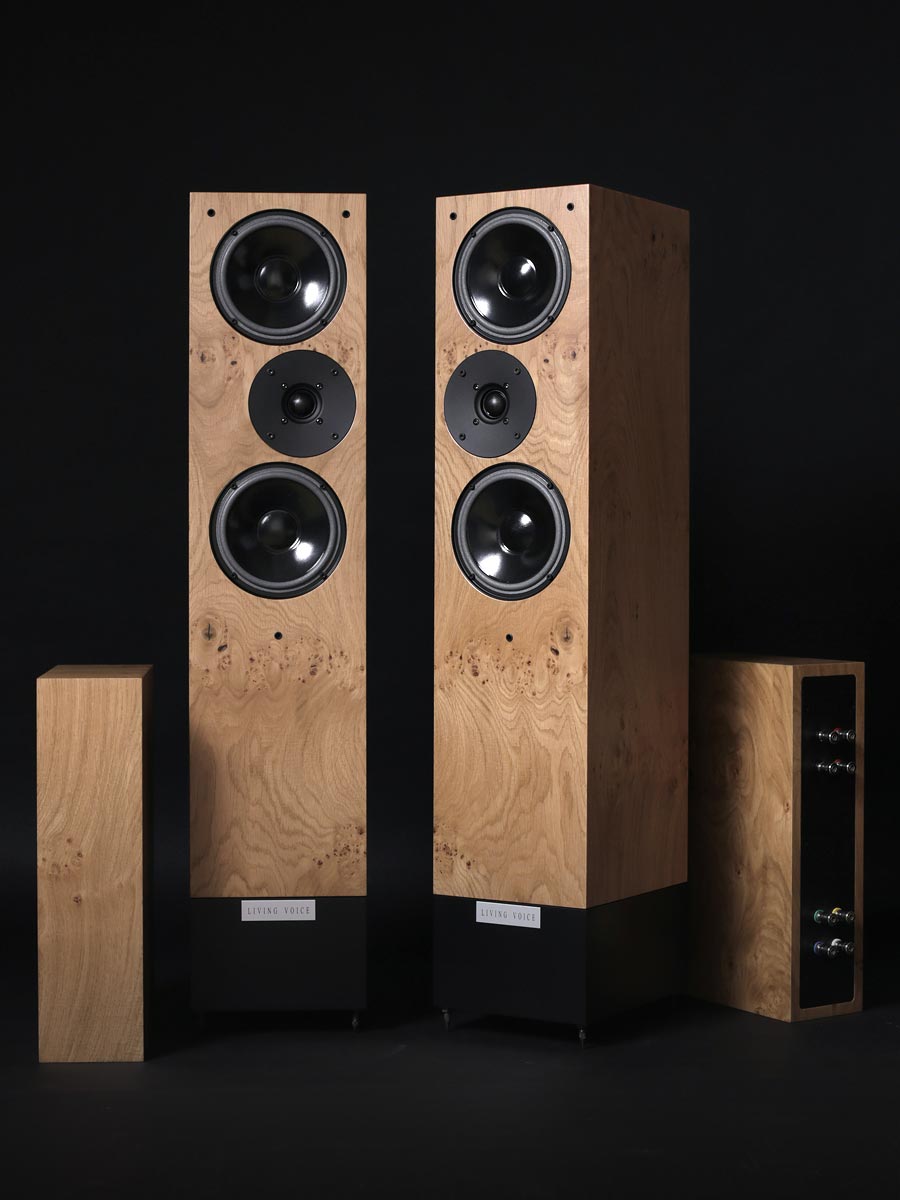 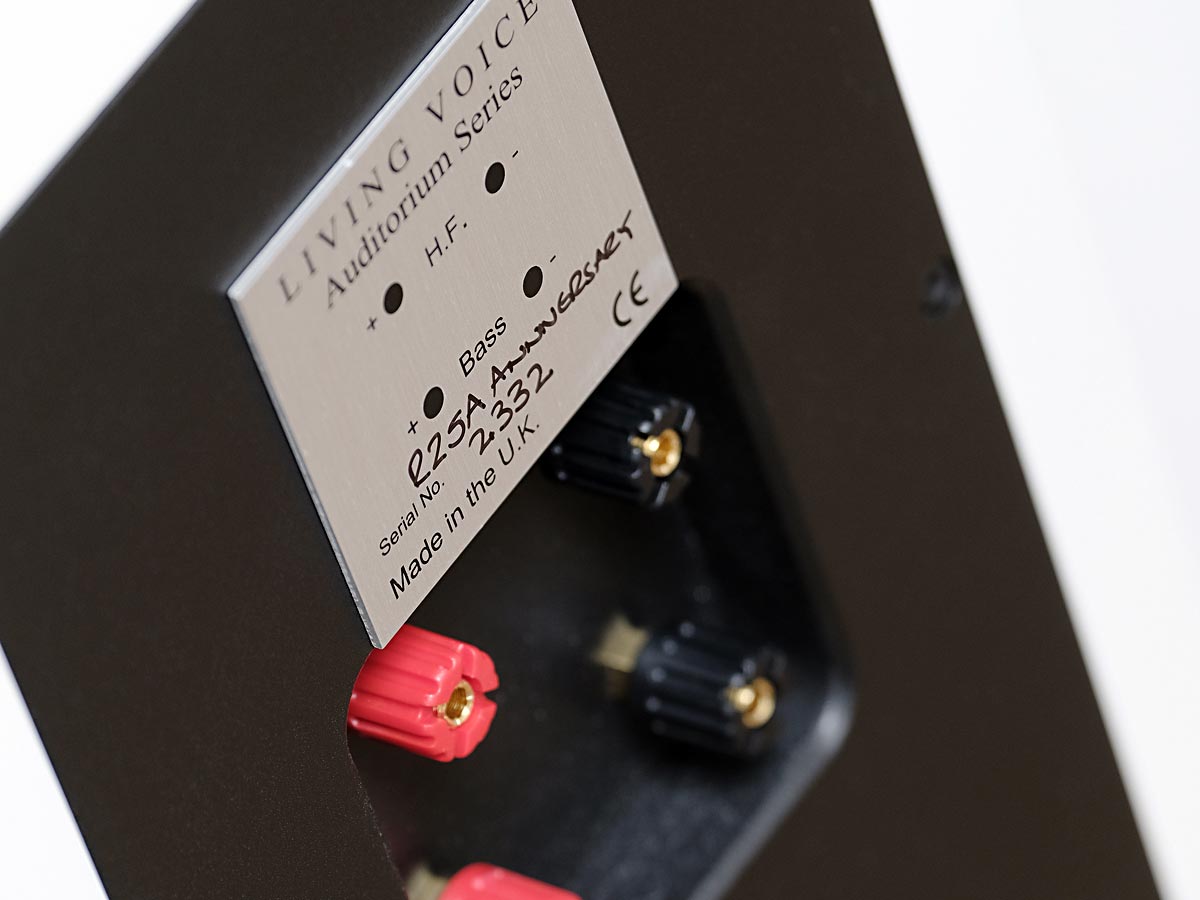 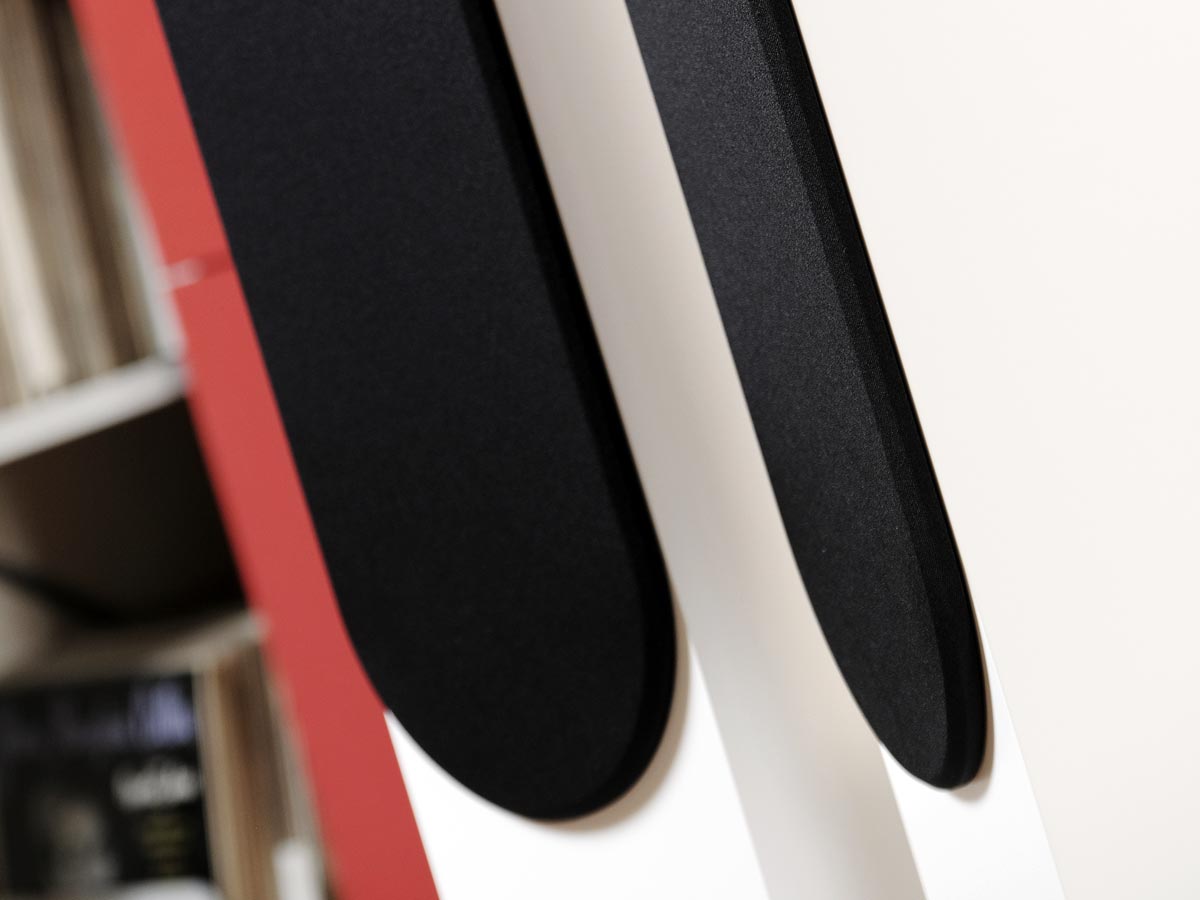 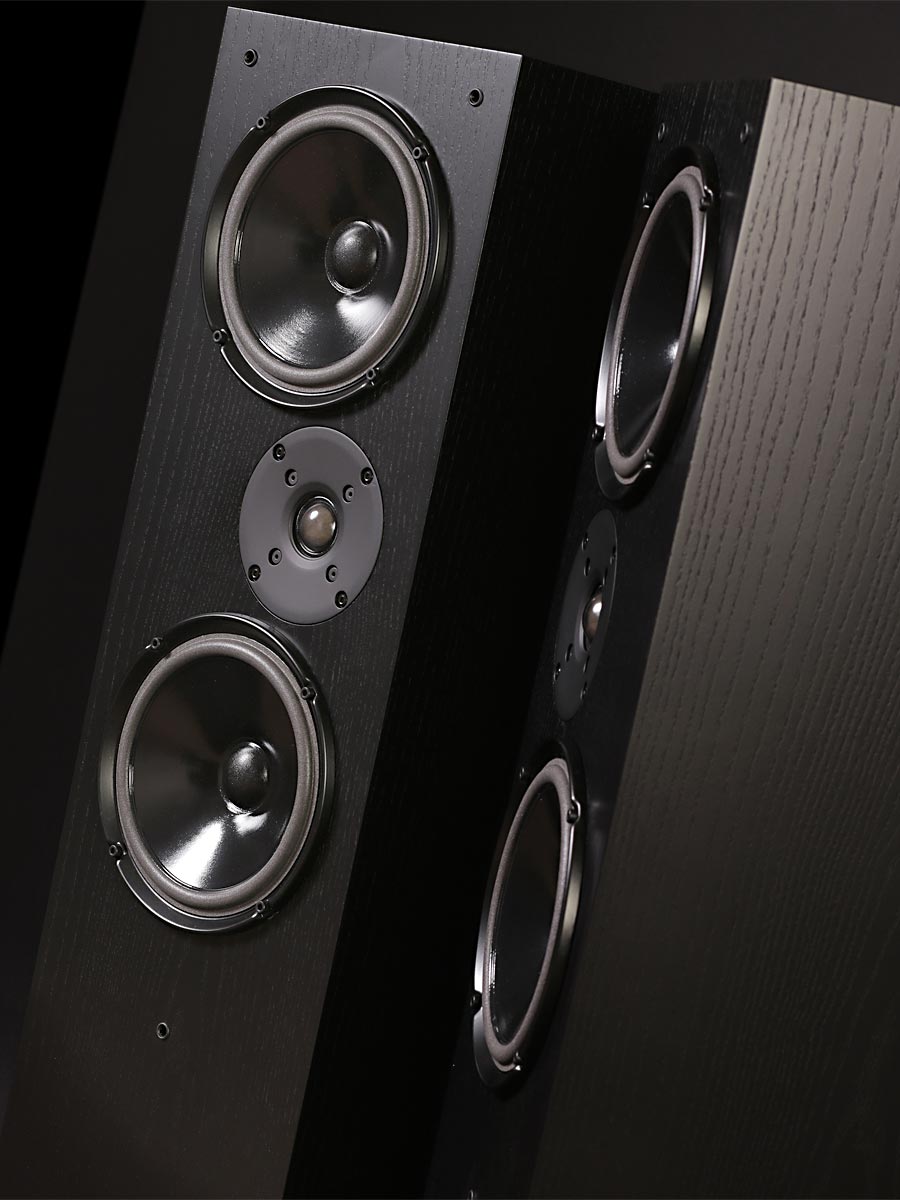 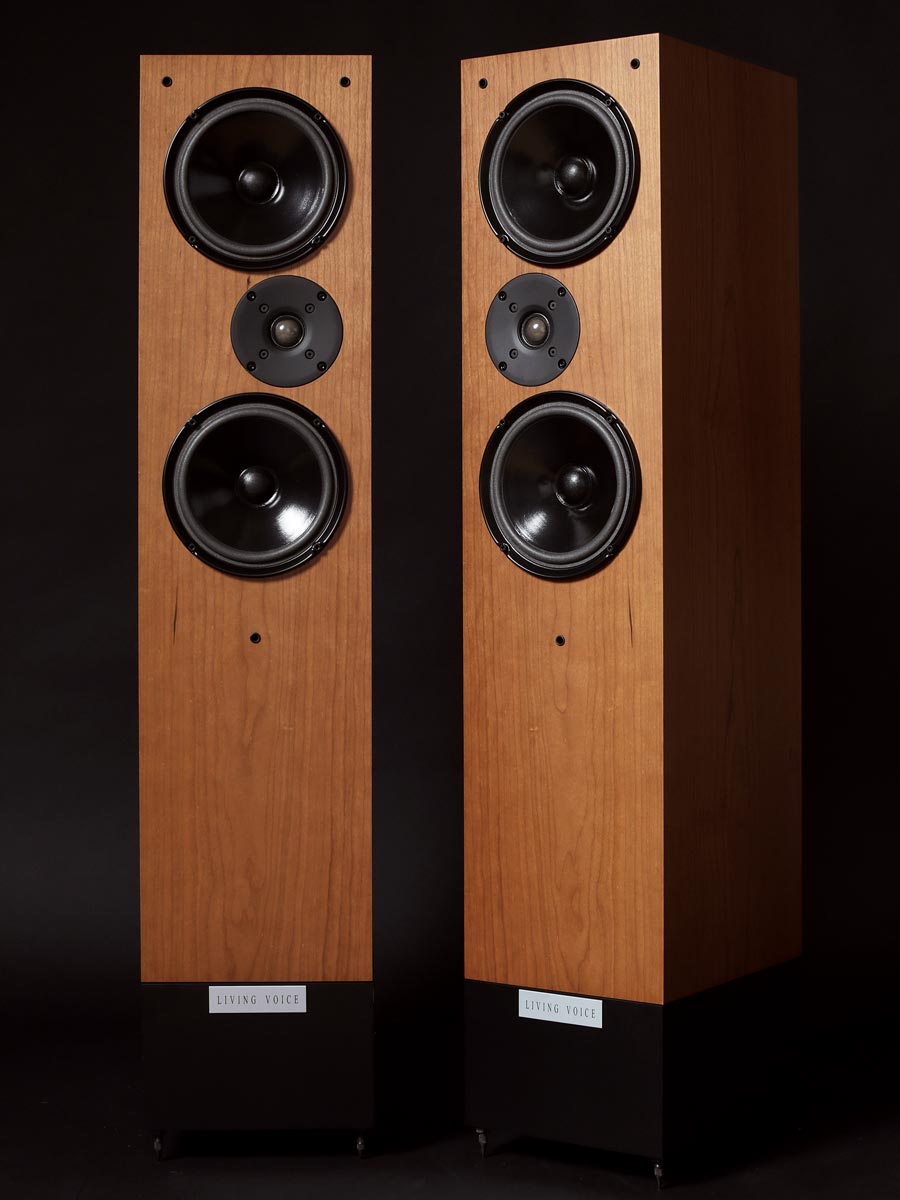 No component is truly benign and there is always a hint of added character, colour or texture which influences the sound. We have literally hundreds of components of different technologies in our R&D library which we can refer to when we are voicing our designs. Finely-honed subjective management of these unmeasurable, unquantifiable characteristics is as important as the strict science of precision crossover filter design. Our crossover designs are the product of three decades of evolution; the goal is the seamless integration of cabinet and drive units to produce an organic ‘out of the box’ listening experience.

We develop all Living Voice loudspeakers using demanding broad spectrum complex musical programmes, with the emphasis being on holistic musical expression, communication, and balance – of creating the illusion of real human beings performing with passion and purpose.

The Auditorium was originally designed in 1991 and remained in production until 2001 when we introduced the Auditorium MKII, succeeded in turn by the Auditorium R3R in December 2011. The current iteration Auditorium R25A, announced in December 2018, extends the original design concept while retaining its core strengths. It employs a different crossover topology to the other models in the range and has its own specific drive unit complement and vent tuning frequency. You can read more about the development of the R25A in this interview.

The Avatar is the second model in the Auditorium Series. Originally conceived as a more refined version of the Auditorium, in its fourth generation it has matured into a spectacular communicator. There is a lithe muscularity and a confident swagger as it breezes through even the most complex and demanding of music programmes, regardless of genre.

The IBX-R4 is positioned right at the centre of the Auditorium Series. It has all of the virtues of the Avatar R4 with added refinement and sophistication by virtue of our proprietary high-frequency driver and its associated filter network. The IBX-R4 is a mature and compelling musical companion that rewards on every level; equally at home whether playing at low or high volume levels, on simple or complex music, driven by basic or sophisticated amplification. A confident all-round performer, all genres of music can be experienced to their full potential.

RW4 is the top model in the range, available with either inboard (IBX) or outboard (OBX) crossovers.

The IBX-RW4 inboard crossover variant has the advantage of a closer coupling of the crossover filters to the drivers. This gives a marginally tighter presentation and a slightly more determined, urgent feel. There is shape and texture across the full frequency range and the bass performance is deep and rich with scale, authority and ease. With a near perfect balance of size, bandwidth, efficiency and tonal refinement this is the choice of the serious music lover when domestic considerations rule out having external crossovers.

OBX-RW4 is the top model in the range, with outboard (OBX) crossovers.

The OBX-RW4 outboard crossover variant allows the capacitors, inductors and resistors to be isolated from the high levels of mechanical energy inside the loudspeaker cabinet. All crossover components are microphonic to a greater or lesser extent, so housing them externally minimises this feedback and provides appreciable benefits. Furthermore, an external crossover facilitates a more generous physical separation of the crossover components. Even when components are laid out with mutually orthogonal orientation, there is still a degree of inductive and capacitive coupling which disturbs the crossover’s behaviour. Generous physical separation eliminates this parasitic coupling.

This approach confers several musically valuable benefits – a quieter background, an elasticity and freedom of dynamic range and a more distinct and intelligible acoustic space conveying time and poise. This quality contextualises the musical performance adding to the easy suspension of disbelief. The outboard crossover has further benefits; tonal colours are more radiant; textures are more distinct and unambiguous; the presentation is calmer with more expression in the playing. Perhaps most importantly, dense, complex passages are easily comprehensible and unforced.

The OBX-RW4 sets an absolute performance benchmark irrespective of size or price. It is everything the serious listener could wish for, capable of compelling storytelling with perfect timing and heartfelt lyricism as well as the ability to shock, surprise and transcend. The OBX-RW4 is a musical communicator of the highest order. For the very focused music lover the OBX-RW4 is the way to go.